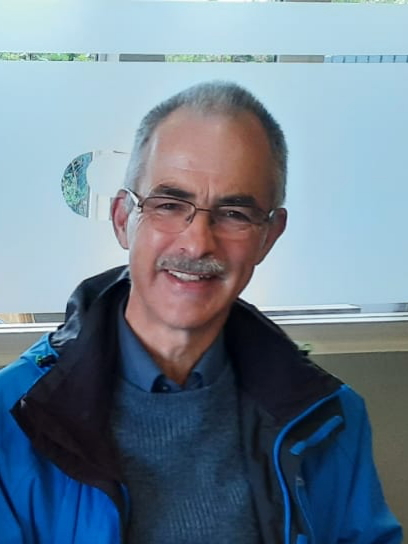 Vivian Young worked with the computers that ran customer accounts at the Electricity Supply Board, starting as a mainframe operator in the 1970s. When he left the company, more than three decades later, it had phased out its final mainframe.

As an IT manager his responsibilities included IT audit, planning, operations and governance.

I joined ESB straight from school as a clerical officer in February 1972. In February 1974 I moved to the computer department as a trainee computer operator. Training consisted of reading a small number of IBM operator training manuals and on-the-job instruction on ESB’s computer operations procedures.

The computing organisation was part of the general services division, reporting into the accounts department. It had about 70 people and ran financial and administrative systems on an IBM mainframe. There were about ten people working in software development and maintenance. The main applications on the computer were electricity billing, cash payments, payroll, costing and inventory. Between 20,000 and 25,000 meter readings and cash payments were processed each day and an equivalent number of electricity bills produced later that evening.

At that time, ESB had an IBM System/360 model 40 with 128K memory running DOS/360. Computer operations worked a 16 hour day from 8 in the morning to 12 at night. There were two shifts with two operators per shift. If one of the operators was on holidays, or out for some other reason, an operator from the other shift covered the two shifts. Three of the four operators who were there when I joined continued their computing careers in ESB.

The mainframe was connected to IBM 2314 removable disk drives. There were no tape drives and the data on the disks were backed up by copying one disk to another. The backup disk was then removed from the drive and stored in another location in a fireproof safe. The disk drives were addressed using a removable numbered plug and these numbers were used to identify the disk(s) to be used. For example, the backup program would copy the disk with plug number 171 to the disk with plug number 152. If the operator made a mistake and put plug 152 into the wrong drive then it would be overwritten with the backup files from drive 171. The plugs were checked very carefully before each job but errors did happen, though thankfully only very rarely.

The DOS/360 operating system was divided into three partitions. We used one background partition for batch programs and two foreground partitions for programs like CICS. In the batch partition each program was run sequentially. So, while the billing program was calculating customer bills, no other batch program could run. When the billing program finished, a printing program would then print the bills over the next two hours. Again, no other program could run on the computer while this was taking place and there wasn’t much for the computer operators to do other than keeping the printers fed with bill stationery.

The ESB was organised into twelve geographic districts. Each had a single teletype terminal which it used to connect to CICS and to carry out some basic queries on customer billing information. All twelve districts connected to the mainframe over just three dial-up lines at speeds as low as 300bps.

In 1975 ESB upgraded the mainframe computer to an IBM System/370 model 145. This had 768K memory and ran the MVS operating system which allowed multiple online and batch programs to run at the same time.

At that time my shift leader was Michael Leahy who went on to become the chief information officer for ESB. Kevin Coffey was the computer operations manager and his responsibilities also included a large data prep team of about 30 key punch operators. Eamonn Halpin was the software manager and Tom Bolton headed up the systems programming team. Sean O’Neill was in overall charge of the computer division.

In 1976 I started a four year evening BSc computer science degree in Trinity College Dublin (TCD). The university used a System/360 mainframe to teach programming languages. The course content was very wide ranging and included modules on electronic logic circuits, the Assembler and Pascal languages, operating systems, data communications, mathematics and economics. Professor John Byrne was head of the TCD Department of Computer Science at that time and Lewis Leith headed up the evening degree course. Notable lecturers included Michael Purser who founded Baltimore Technologies and Ray Bates who went on to head up the National Lottery.

I began programming at the ESB in 1977 after one year of the degree course. The first application that I worked on was for supplier payments. After two years I was appointed as a systems programmer and held that role when I completed the degree in 1980.

In 1978 the ESB replaced its 370/145 with the more powerful 370/158 with IBM’s TSO installed. This time sharing system was used for online program development – a very significant step forward. Previously programmers hand wrote program instructions which were then punched onto cards. Compilation and testing with these cards required multiple batch runs on the mainframe with long turnaround times for each run.

At the same time new IBM 3270 display terminals replaced the old teletype terminals and leased line connections replaced dialup lines. Line speeds increased gradually up to 9600 bps during this period and a single 9600 line supported up to five or six 3270 terminals in each district office. 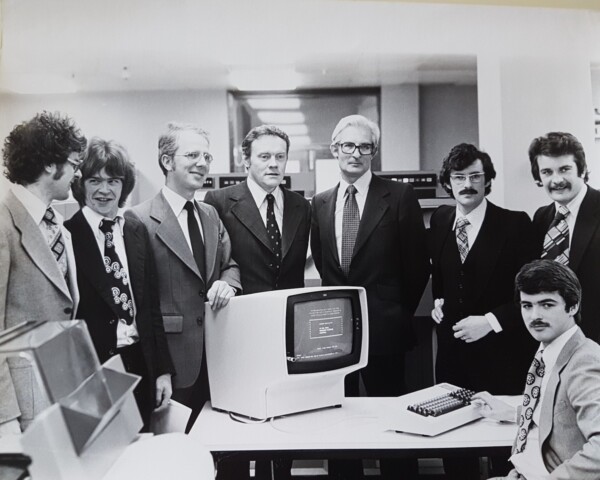 The ESB marked the connection of its one millionth customer with a random draw on 07 December 1978. Vivian wrote the software for this draw and is sitting at the terminal. Also present at the event were (l-r): Ciaran Gogarty, John Kelly, George Bowes, Kevin Coffey, Seán O’Neill, Donal Ryan and Seán Brophy.
Photographer unknown. Photograph courtesy of Vivian Young.

The company reached a landmark in December 1978, when it connected its one millionth customer. There was, however, no exact way to identify that customer. Each night we added new ones to the accounting system as part of a batch updating run. Somebody decided for publicity reasons that the company would pick a customer randomly from the batch of new accounts that would raise the total over one million. I was asked to write a program for this random draw.

At that stage there was no random function in the PL/I programming language that we used – although one was added subsequently. I therefore constructed a dialogue with the computer operator, asking several unnecessary questions about the date and time of the draw, then used the millisecond portion of the timestamp of each operator reply to construct a random number. This was used to iterate through the batch and thus select the winning customer. I tested the program extensively to prove that the numbers it produced were truly random.

In the late 1970s we began to work on a new customer accounting system which would reduce the gap between a meter being read and issuing the corresponding electricity bill to three days. Reducing this gap would bring financial benefits to ESB and was the main element of the business case to replace the existing software.

Ted Dalton was the project manager for the new system, which used IBM’s Information Management System (IMS) and its DL/I hierarchical database. This was the first database system used in ESB and required new skills in database design and management. The IMS/DC transaction manager replaced CICS. We felt that IMS/DC would provide better linkage with DL/1, though CICS could also assess DL/1 databases.

ESB continued to upgrade its mainframe hardware to meet increasing demand. There was a very long lead time – up to a year – on new mainframes. We tracked mainframe utilisation and performance very closely in order to identify well in advance when a capacity upgrade would be needed. Capacity planning was a continuous process. Maintaining TSO response times of three seconds or less was the overriding performance target as this was seen as key to developer productivity. If this performance was achieved, there was always adequate capacity for batch processing in the evening.

We moved to the IBM 3031 and then upgraded to a 3031 with an attached processor. In 1985 we installed two IBM 4381s. ESB chose these air-cooled mainframes to avoid the need for providing a chilled water supply. The next logical upgrade would have been the IBM range of water-cooled mainframes. Four years later we moved to an Amdahl processor. This was purely a cost decision as the Amdahl system was plug compatible with IBM mainframes.

PCs started to appear in ESB in the mid 1980s and functioned at first as standalone machines. They were used for a wide range of engineering and administrative tasks. Subsequently they ran 3270 emulation software for both 3270 terminal functions and data download.

I remember being involved in checking the security of PCs around the country in the late 1980s and trying to explain to one lady the need for a power-on password for her PC. She was very nervous using the PC and didn’t want to complicate her startup procedure with an extra password step. She asked me could she use “Daniel” as her password and when I said “yes” she relented and said her fingers would just skip across the keyboard every morning – a true Daniel O’Donnell fan.

The mid to late 1980s was the high point for mainframe use in ESB. Towards the end of the decade we saw how the growth in distributed computing in the marketplace would move computing away from the highly controlled centralised mainframe environment. The three main ESB engineering business units – power generation, system operation and distribution – all adopted Digital VAX computers as distributed systems. By the 1990s the entire ESB computing organisation had around 500 people, but it had become in part decentralised.

The main financial applications continued to run on the mainframe and were replaced with SAP financials. From that point on there was little new development of mainframe applications. The mainframe was subsequently retired from use and the 3270s were finally replaced by PCs with the introduction of a new SAP customer system in 2005.

I stayed with ESB for my entire computing career. In 1987, after nine years in systems programming, I moved into management and held a succession of roles until I left the company in 2008. These positions included technical infrastructure manager for the market opening programme, which ran from 2002 to 2005. Michael Leahy managed this project. It opened up the Irish electricity market to multiple electricity retailers and was the most significant IT achievement that occurred while I worked in ESB.