Seamus Clince worked in a Department of Finance group that assisted other branches of the civil service to devise information technology strategies. This role not only gave him a broad knowledge of public service computing in Ireland, but also of IT policies and practices for public administration around the world.

His technical career began on the first computer in the civil service and included a series of projects for the Department of Social Welfare, which subsequently built up one of the largest installations in the country and became a major reference site for Digital Equipment.

I started my civil service career as a clerical officer in July, 1959, in the Office of the Revenue Commissioners. In 1963, I was successful in an internal selection process for computer programmer – one of the first six programmers in the Irish civil service. The others were Dermot Treacy, Martha O’Brien, Maura Healy, Mary Nealon and Kay Deasy.

We did a training course run by International Computers and Tabulators Ltd. (ICT) in Bradenham Manor, Oxfordshire, as Revenue’s computer at that time was an ICT 1301. This was the first computer in the civil service and one of the first in Ireland. It had a core memory of just 400 bytes and both master and transaction files were on punch cards – no such luxury as magnetic tapes or discs in those early days!! Magnetic tapes were available but relatively new – perhaps too new for management in Revenue.

To add to the problems as a programmer, there were no computer languages as we knew them later. Each instruction consisted of a two-digit numeric instruction and a 3-digit numeric address. For example “37 388” meant pick up the data in location 388 and “42 389” meant store it in location 399. As you can imagine, this made writing a programme to calculate income tax a lengthy process. In addition, there were no data names so we had to use a large chart to record the contents of each of the 400 locations.

A small number of Irish government departments and offices entered computing with their own systems at this time. In 1967, The Land Commission installed an IBM System/360 model 20 with 16K memory to collect land purchase annuity receipts. In the same year, The Department of Defence used the same model, but with just 8K of memory, to deal with army pay. In Revenue, the assessment and collection of income tax was completed by 1965. In 1967, Revenue switched from ICL to two Honeywell H200 model 1200 processors with a total of 115K memory and adopted COBOL for all its programming needs.

My career as a programmer ended in 1965 when I qualified as an outdoor officer of Customs and Excise. The following seven years were spent in such exotic places as Ballina, Bridgend, Crossmaglen, Portarlington, Dublin Airport, Harp Brewery and Jameson’s Distillery. It’s well I was a non-drinker! It provided great and varied experience after the very technical work as a programmer and, gave me an understanding of organisational issues which helped in my future career as a systems analyst.

The interest in computing was still there and, in 1972, I was successful in a civil service aptitude test for systems analysts. Training this time was a six-week course in a polytechnic in St. Helens, Lancashire. I was assigned to CDPS, which opened its installation in Kilmainham in 1973 with an IBM System/370 model 145 with 256K of core memory and six disk drives with 180MB of memory. The Principal Officer in charge of CDPS was Maurice O’Connell, supported by four Assistant Principals – Michael Cullinane, Michael Kelly, Sean O’Connell and Dick Nolan.

From 1972 to 1979 I worked on projects in the Department of Social Welfare under Michael Cullinane. Among those who worked with me were Joan Connolly and Marion Eddery. All of the programming was done in-house. One of the projects we worked on was the registry system, using Digital Equipment Corporation’s PDP-11/70s with the TRAX transaction processing system. This was later upgraded to a VAX system, described at the time as a “super minicomputer”. We also worked on some small projects such as treatment benefit and maternity benefit but the ones I would like to deal with here were bigger.

The first major project was the computerisation of the disability benefits system. This ran on the IBM mainframe in Kilmainham, which was used by about twenty public service organisations. In 1973, the Department of Social Welfare installed two Honeywell Series 16 model 716s (subsequently replaced by H2200s) and the disability benefits system was transferred to them.

Disability claims were set up by checking the claimant’s insurance record of contributions manually in the central records branch of the Department of Social Welfare to ensure entitlement and, then, entering relevant details to the computer. As weekly medical certificates were received, they were keyed into the computer and generated a payment by cheque. While relatively simple, the system had high volumes (approximately 60,000 per week) and frequent turnover of cases as most illnesses were of short duration.

I became an Assistant Principal in 1979 and was assigned to work on the computerisation of the central records branch, which had 1.8 million individual records. Computerisation took place in preparation for the introduction of the first pay-related social insurance (PRSI) scheme, which commenced in 1988.

PRSI made two major changes to this. Firstly, contributions were transmitted electronically by Revenue and automatically updated on the central records system, thus completely eliminating the first task. Secondly, the processing of new claims was done by accessing the contribution records via a VDU terminal so staff spent most of their day seated rather than on their feet! 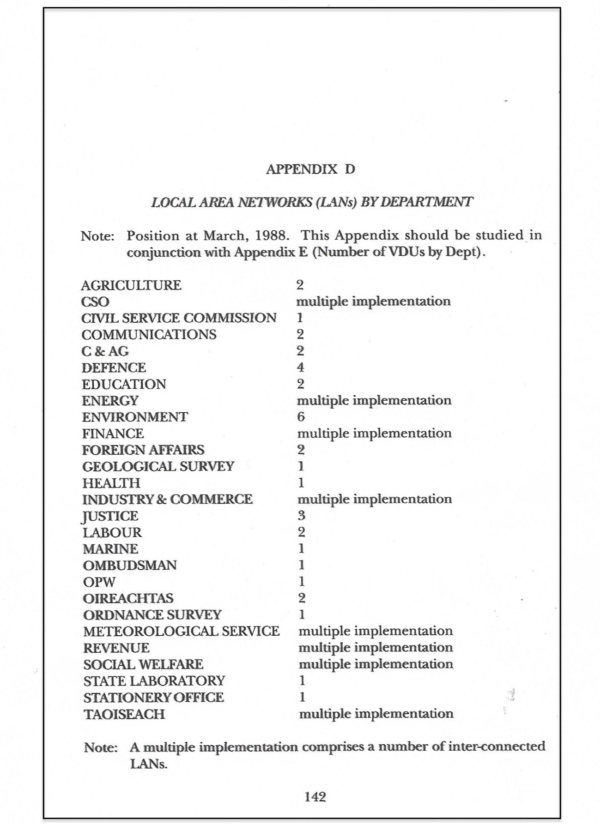 I would like to recall some organisational issues in the early days of civil service computing. A 1982 review of government computerisation recommended, inter alia, that:
• Every Department/Office should have primary responsibility for management of its own systems.
• Ten Departments/Offices should have a full system development and operational capability.
• A small service, Central Computing Service (CCS) should be maintained to serve other Departments/Offices.
• An Information Management Advisory Service (IMAS) should be established within the Department of the Public Service.

This arrangement continued until 1989 when CCS and IMAS were re-integrated into the Department of Finance as Central IT Services (CITS). This was probably because IT support was considered to be weak or disorganised in some departments and offices and because there was a desire to re-enforce the mandate of the Department of Finance in addressing the strategic needs of the civil service in the years ahead.

In his Overview of Civil Service Computerisation, 1960-1990, published by the ESRI in 1992, Robert Pye notes that the advent of distributed processing had major implications for CDPS. The minicomputer had three very significant advantages: minimal requirements for special accommodation; no requirement for specialist operators; and the convenience of online data entry and retrieval.

Also, in that year, myself, Niamh Campbell and Evelyn Blennerhasset of the IPA produced Achieving the Benefits of IT in the Civil Service, published by the IPA. Mentioning the IPA reminds me that I did some lecturing on information management for their evening diploma course.

The report concluded that IT had a major beneficial impact on the civil service but that the impact had been uneven. There was considerable scope for improvement and it recommended a focus on management of change and improved management of the IT function in departments/offices.

IMAS was a small section of about ten people whose main role was to support those departments which had no need for large scale computerisation. They were best served by office information systems (OIS) such as word processing, spreadsheets, decision support systems, desk-top publishing and e-mail – no internet yet! There were three sub-sections in IMAS. One, staffed by Jim Duffy and Michael Hegarty, provided high-level technical support in areas such as telecommunications and database management. Another supported the OIS area.

The purpose of the third sub-section, in which I served, was to help departments to develop strategic IT plans using such techniques as critical success factors and information management. We used the term “strategic plans” to indicate that the plans should be driven by the key business needs of the organisation rather than technical issues and, to this end, insisted on the involvement of management at all levels during the projects. 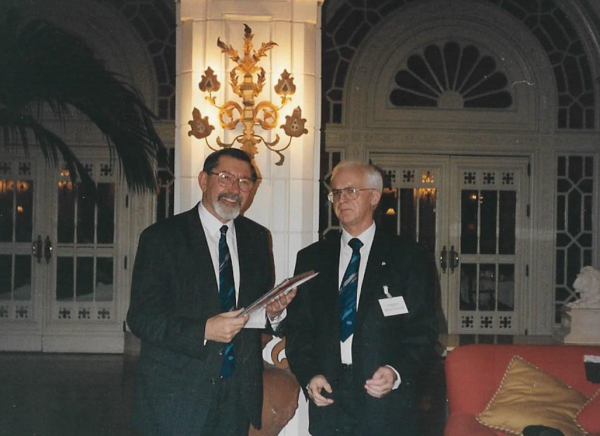 Peter Hearson (UK representative) and Seamus Clince at an International Council for IT in Government Administration conference in Valetta, Malta, in 1995.
Photograph courtesy of Seamus Clince.

From 1985 to 1995 we produced plans for most departments and offices in the Civil Service. One of the most interesting was for the Department of Foreign Affairs because of the need for communications with its embassies abroad. The project in the Department of the Taoiseach was also challenging because of its need for contact with all departments and some difficulty in defining its management requirements.

At that time, we had strong links with the ICA – not the Irish Countrywomen’s Association, but the International Council for IT in Government Administration. This was a group of central government IT advisory units in most European countries, Israel, USA, Australia and New Zealand. It later expanded into other countries.

My colleague, Harry Nally, was appointed chairman of ICA in 1985 and I served for two years as his assistant. I then served as chairman of the programme committee until 1993. This group was responsible for organising a week-long conference in a different country every year. The conference consisted of presentations of case studies, working groups on specific topics and a “round table” where each country reported on its achievements in the previous year. I then served as chairman of ICA from 1993 to 1995. The fact that Harry Nally and myself were selected to chair ICA was, I believe, an indication of the respect abroad for the level of computerisation in the Irish civil service.

My final promotion was to Principal Officer in 1986. During my career, I believe that I was lucky on two fronts. Firstly, I was often in the right place at the right time and, secondly, at all stages I was surrounded by very capable and enthusiastic colleagues. I believe that, together, we developed a strong base for the continued growth of IT in the civil service.