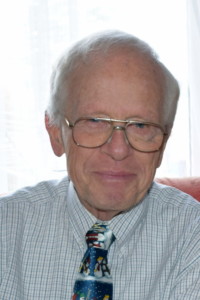 George Morgan joined IBM Ireland in 1962, when most of its customers still ran tabulating machines and the ESB was its only computer user, and retired in 2000, when the corporation was claiming to be the inventor of e-business.

Not all of his career was spent inside IBM. George witnessed changes in the computer industry and the IT profession from a different perspective during a 14-year spell at UCD.

I graduated from UCD in 1962 with a degree in electrical engineering. I have no memory of any mention of computers when studying, but I did complete a course in electronics under Jim Lacey. I was offered a position in Aer Lingus but at the last minute I applied for a job in a new company in Dublin called IBM. IBM had been in Dublin since 1956 and by 1962 was well established in 28 Fitzwilliam Place – aka Hamilton House. I was hired as part of a team to support a recent sale of a new airline reservations system to Aer Lingus. Of those that made me welcome in those early days I recall Derek Overend, Noel Peare, Andre Girault, Margaret Fitzgerald, Charlie Craddock, Tony Furlong, John Moriarty and Peter Squire. 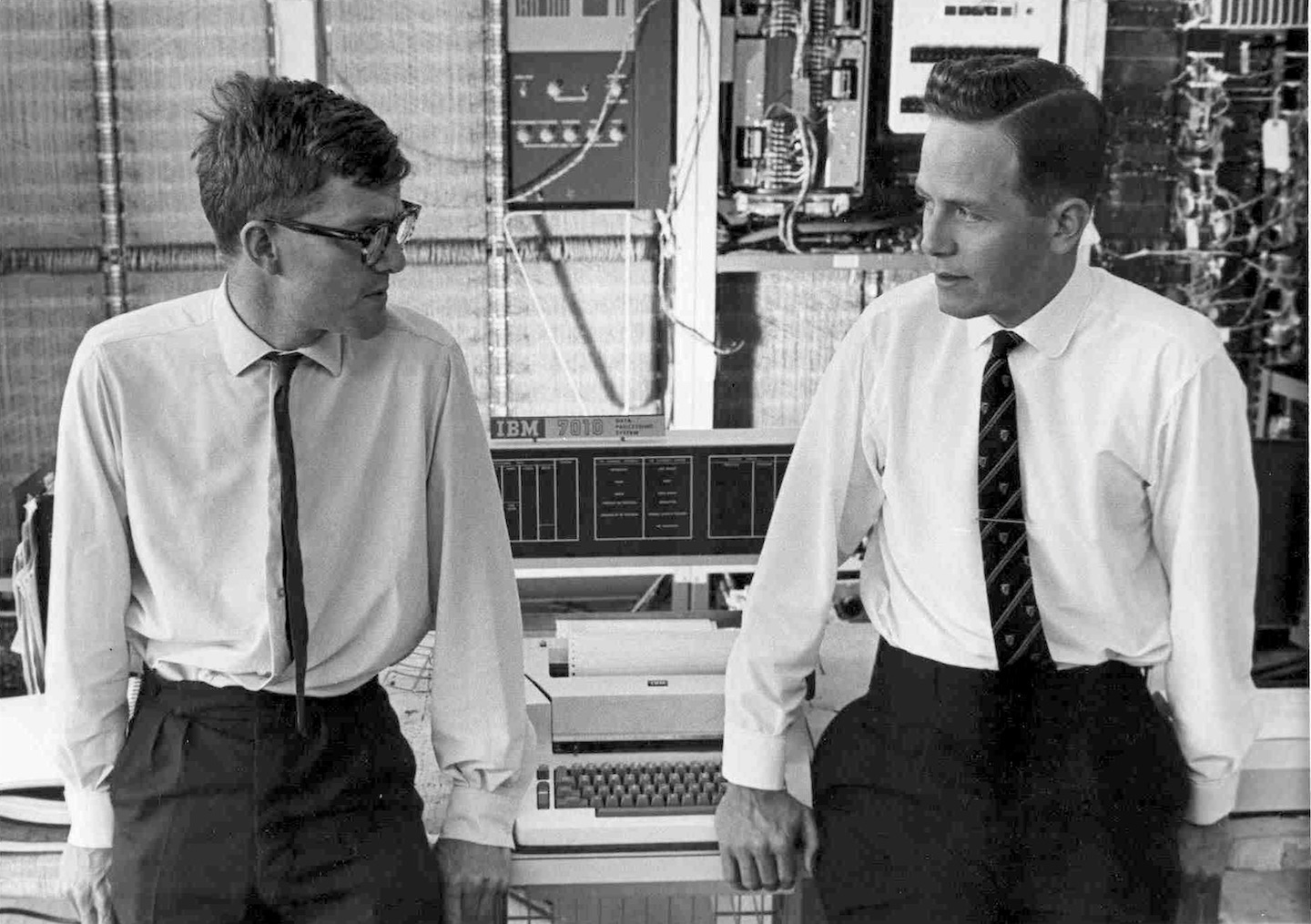 The Aer Lingus support team consisted of Barry O’Connell, the brilliant Nick Spalding and myself, together with three engineers from IBM UK. We six were dispatched to Poughkeepsie in New York State for a year’s training on both the hardware and software of a top of the line IBM 7010 computer. We worked and studied alongside a team from Italy who were to install a similar 7010 system for Alitalia.

As our year-long training drew to a close in 1964, IBM announced the new System/360 range of computers. Aer Lingus decided to await their availability and installed a small interim IBM 1440 computer in Dublin Airport. We returned to Dublin and the team was disbanded. I worked for a short period in Dublin Airport on the installation of the 1440 system. I particularly remember working with an Aer Lingus staff member named Liam Cassidy. Liam was a true gentleman. In the years that followed, Aer Lingus installed twin IBM System/360 Model 50 machines to run the IPARS reservation system.

IBM Ireland founder Ray Girault had some THINK signs made in Irish during the company’s early years. They were identical in construction to the original signs that displayed the corporate motto in the US. IBM employees around the world directed each other to THINK in a variety of languages. This sign sat on my desk and it’s still in my possession.
(Photograph by George Morgan)

Back to 1962. I have a particular memory from my first days in IBM. I was brought along to the ESB to see their IBM 650 computer. It was described to me as a cabinet full of little glass bottles with candles inside. It was built mainly on thermionic valves and used a rotating drum storage. Along with a large room full of tabulating machines, it managed the billing for all ESB customers. The engineer responsible for keeping the candles lighting was Barry O’Connell. Other engineers I remember were Tommy Dwyer, Peter Rice and Harold O’Hare. My memory of those days is that most IBM customers used punched cards and tabulating machines. The only exceptions were the ESB and the Sugar Company who had those early valve-based computers. The tabulating machines were ‘programmed’ by using plug wires on a large plug board. The wiring caused mechanical relays to be selected which in turn incremented mechanical counters.

In those days IBM also operated what was known as a service bureau. Customers around Dublin provided their input data on punched cards and IBM used its own tabulating machines to produce such things as payrolls and invoices and other accounting services. IBM also provided a card punching service. 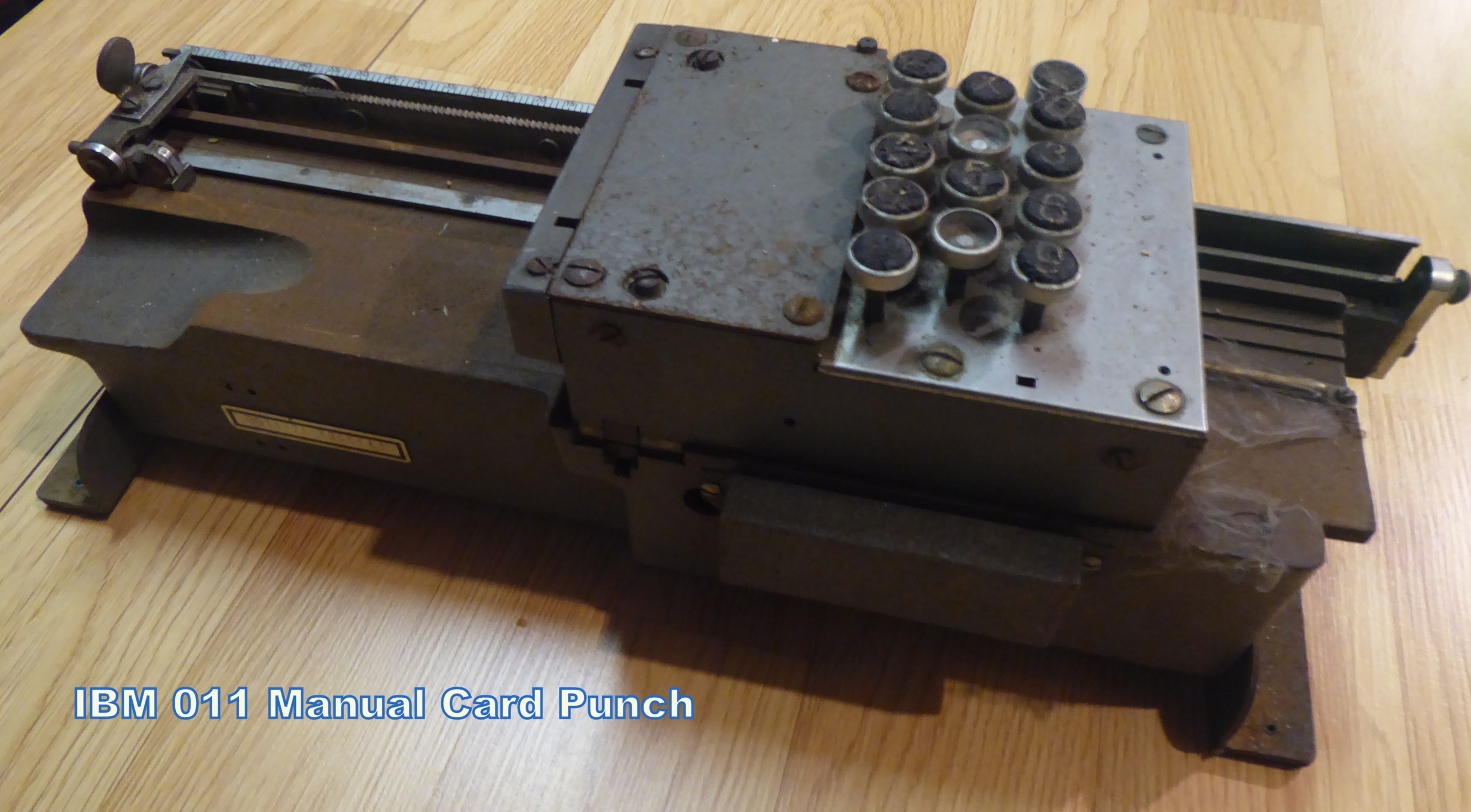 This device served its time at IBM Ireland in the 1960s. I recall Nick Spalding using it in an emergency.
(Photograph by George Morgan)

Along with System /360 IBM announced a new operating system. It was based on punched cards and called Basic Operating System (BOS). To support these new operating systems for /360, a European Support Group for software was set up in London. I was offered a position there and moved to London for the following five years. BOS was soon replaced by TOS (a magnetic tape-based system) and then by DOS (a disk based system). Finally, IBM introduced the Primary Control Program, the forerunner of what was to become MFT, then MVT, then MVS with TSO and other operating systems up to Z-OS. DOS did continue to be used on the smaller systems.

I returned to Dublin in 1969. About that time some senior people in IBM Ireland were planning to leave IBM and setup a consultancy business. It was called System Dynamics and the key people who left were Paddy Doyle, Tom McGovern, Brendan Byrne, Joe Cunningham and ‘Pad’ Padmanabhan. I was offered a position and joined in early 1969. I recall working with Declan Cunningham.

The unstructured nature of this work was not to my liking. The consulting assignments involved advising businesses what to do, but not having to do it!! I decided I was a do-er. Within a year I successfully applied to UCD for a job in their new computer facility in the new campus at Belfield. Coincidently, many years later, Brendan Byrne left System Dynamics and came to work in the embryonic computer science department in Belfield. Brendan was quite brilliant. I can still hear his mid-Atlantic accent recalling his days working for Martin Marietta in the USA and discussing z-transforms.

At that time UCD was moving from Earlsfort Terrace out to the new campus in Belfield. The Computer Laboratory, as it was known then, was a new small single storey building beside the Physics Department (it was still there almost 50 years later). Initially it housed the IBM 1620 computer system, transferred from the Terrace. It was soon replaced by an IBM System/360 Model 50. The director of the laboratory was Dr Frank Anderson and I rejoiced in the splendid title of head of systems and advisory services. I was joined by Phil Moriarty as operations manager and by Jack Lowe as head of administrative services. Phil had previously managed the IBM 1620 computer in the Physics Department in Earlsfort Terrace. Our colleagues included Ted McGrath, Michael Walsh, Michael Maher, Eoin Barrett, Loretta O’Connor, Anne Thompson, Les Geraghty, Alex Scollan, Gay Kennedy, Gerry Quiney, Dan O’Shea, Niall O’Reilly, John O’Connell and one Dennis Jennings, who was to return some years later in 1977 as director of the laboratory.

Being an engineer, I was particularly interested in the computer service being provided to the Engineering Faculty in Merrion Street. Our main contacts there were Bernard Reardon, Jim Walshe and Philip O’Neill. A remote job entry terminal was installed in Merrion Street and students there could send their Fortran programs out to Belfield for execution with the results then being printed back in Merrion Street. During that time I did some work with Paddy Doyle. Paddy had left System Dynamics and was lecturing in the UCD Engineering Faculty.

An interesting memory of my time in UCD was the establishment by Amdahl of a manufacturing plant in Swords in 1980. Amdahl made high-end computer systems that were plug compatible with IBM System/370. The systems being built in Swords were of a size and power beyond anything they might sell in Ireland. On the production line they needed test programs to fully exercise the powerful systems being built. Programs were left running for long periods to soak test the hardware. I suggested to some UCD researchers that they might be interested to use these extremely powerful Amdahl computers for their research computations. I particularly remember Sean Corish in the Chemistry Department and Noel Fitzpatrick in the Experimental Physics Department being very excited by this opportunity. Amdahl agreed to use the chemistry and physics simulation programs as test vehicles for their hardware and I made regular trips to Swords to supervise the program setup and retrieve the results.

Another memory of my time in UCD was the visit in the 1970s of Dr Ken Iverson. He was the inventor of the programming language called APL. He did a presentation of APL in one of the large theatres in Belfield. The result was that APL became quite popular and for many years the Computer Laboratory provided terminals for staff wishing to use the APL language. The terminals were IBM 2741s which used the IBM Selectric “golf ball” typewriter as the main user interface. A special golf ball was used which contained all the APL special symbols and sticker decals were placed on the keys. APL was used to a limited extent. The languages of choice at that time were Fortran and Cobol with a little Assembler thrown in for good measure. The visit of Iverson was organised by IBM.

Although there was no computer science department in those days, Frank Anderson instituted a computer science option into the basic science degree curriculum around 1972. The first lectures on the subject were given by Frank, Jack Lowe and myself and took place in a classroom in the Physics block. Frank talked Fortran, Jack talked Cobol and I spoke Assembler and associated hardware. Together we set the first computer science examination papers.

Following the appointment of Dennis Jennings as director in 1977, UCD went out to tender for a time-sharing system to move away from the batch processing, punched card-based System/360. The decision was made to install a Digital Equipment DEC-20 with some hundred or so ASCII screen terminals. The laboratory spread its wings out into both the Science and the Arts/Commerce blocks with the establishment of terminal rooms in those locations. During that period I became familiar with the labyrinth of tunnels connecting the various buildings on the Belfield campus. Fibre optic cables were not yet available, so we laid multi-hundred pair copper cables along these tunnels to connect the various terminal rooms.

‘Every Object is a System’ 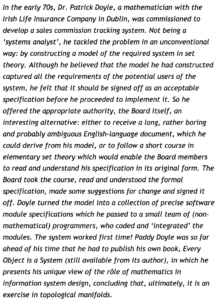 The work of Paddy Doyle (d.2008) attracted international attention. I spent many fascinating hours visiting Paddy in his home in Duncannon and hearing him expound on some fundamental aspects of business systems.